How does Synplify handle and annotate OFFSET constraints for I/Os into UCF?

How does Synplify forward annotate OFFSET constraints in UCF?

Please refer to SolvNet Doc 026883 for more information on this topic.
Synplify Pro supports specification of I/O offset constraints in the form of input/output delays.

These constraints are forward annotated as offset in/out in the .ucf file for the place and route tool.

However, there is a difference between the value specified in the .sdc file and the value forward annotated to the .ucf file.

The offset value forward annotated to the .ucf file is different from the I/O-delay value specified in the .sdc file.
Offset calculations for Xilinx:
Offset-in can be specified in two ways, offset-in before and offset-in after.

'Before' means, before the capture edge of the destination.
'After' means, after the launch edge of the source.

The offset values entered into the .sdc file are offset-in after (Oia) and offset-out before (Oob).

The values forwarded to the .ucf file are offset-in before (Oib) and offset-out after (Ooa).

This is the reason for the difference in values entered into the .sdc file and the values forward annotated to the .ucf file.

Both are equivalent, but expressed in different ways.

Note that the above is true when the input/output is rising-edge triggered.

What is the role of phase-shift in offset calculations?
As phase is considered for the clock triggering of the input/output flip-flop, the role of the clock phase with respect to Oib and Ooa is explained.
For Offset-in:
Consider an offset-in before (Oib) of X ns specified with respect to clock 'Clk'. 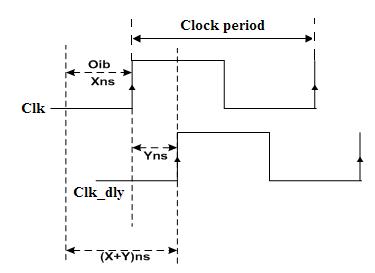 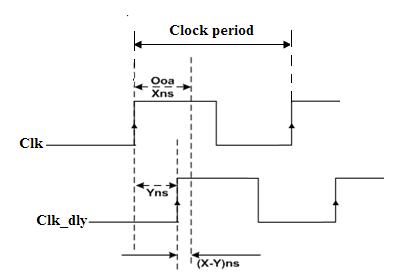 Accordingly, half a clock period is subtracted or added to offset-in and offset-out when forward annotated to the ucf file.
Practical observations:
Clock period = 12ns